“Each writer is born with a repertory company in his head.  Shakespeare had perhaps 20 players.  I have 10 or so, and that’s a lot.  As you get older, you become more skillful at casting them.”

I don’t like this quote.  It makes me feel like my creativity is meaningless, and I’m just dressing up a paper doll when I write.  But after carefully considering it in the week since I found it, I have come to the conclusion that all I could honestly change would be to replace “Players” with “Archetypes.”  I have just begun the cataloguing of my repertory company, literally days ago, and haven’t yet identified everyone in the house, but in taking the initial nose-count, I find myself sorely lacking in women.  I can tentatively identify about five men, give or take one, but in all of my writing, published or not, I only find one woman.  Whether she comes in the guise of Colleen O’Reilly, the reformed Irish terrorist of Chameleon, Galela, sergeant of the King’s Guard from The Wellstone Chronicles, or Patience Hobbs, mischievous pilot of the Kestrel in Beyond the Rails, she is smart, strong, and capable.  She can be good or evil, young or “mature,” heroine or anti-heroine, but no matter who she is, she is always cut from the same piece of cloth.  I thought I might open my quest by trying to find out where she came from.

Born in 1948, my childhood sat squarely in the 1950s, ages 2-12.  Divorce was a dirty word back then, and the Liberation of Women wasn’t yet a defiant gleam in your sister’s eye.  Women were still domestic servants who worked without pay, and while they had achieved the vote some years before my birth, they hadn’t achieved much else.  I saw how women were treated in my friends’ homes, their two-parent homes, and in my naiveté, I wondered at the luck of having a live-in housekeeper who did dishes, laundry, cooked meals, vacuumed, went to the store, dealt with repairmen and peddlers, while the man came home from work and sat down with the newspaper.  So this was manhood?

See, men had disappeared from my home before I was three months old.  My entire upbringing was provided by three generations of women.  My mother was a professional gambler who was in and out of the house the whole time.  My first story about her is of her being 16 years old, pregnant with me, dealing an illegal card game in the back room of a waterfront bar and doing her own bouncing.  Grandma was Rosie the Riveter, one of the legion of women who took over the factories when the men went off to war, and one of the very few who was good enough to keep her job when the men came home again.  Great-grandma was a genuine lady of the Victorian Era, born into North Carolina society in 1888.  All the impressions I formed of women during the so-called “formative years” were provided by this formidable triumvirate.  There was no one in my life to teach me that women were inferior, sex objects, weak, second class, or anything with the slightest negative connotation.  So guess who wound up in my head.

The women who take leading roles in my fiction don’t take no baloney.  They are uniformly smart and capable, can be physical when the situation requires it, and don’t feel like they’re doing anything special.  They stand up to impossible odds, impossible men, decks that are stacked against them, and the condescension and disrespect of their more “proper” sisters, and of men of every stripe, and they overcome.  They persevere and they’re the last one standing when the dust settles; they are all the same woman.

How does a woman like this play in the Victorian world of steampunk?  How do you make her work?  She is a product of the twentieth century; she isn’t supposed to be here.  The problem is that if you write a woman who isn’t a troublemaker of some sort into a Victorian-era novel, she’s going to be all but invisible.  Her role is to keep her head down, her mouth shut, and support her husband or significant male acquaintance in whatever opinion he gives her.  As an author, you aren’t going to get much mileage out of a character like that.  So, what’s a steampunk to do?  Let’s look at how four authors I have recently encountered have dealt with it. 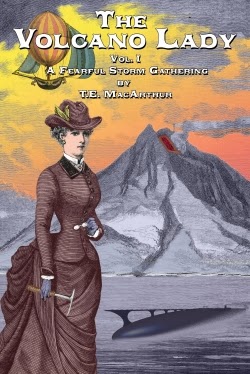 Certainly the most realistic female lead of the group is T.E. MacArthur’s Dr. Leticia Gantry of The Volcano Lady.  Brilliantly written, Dr. Gantry is a female volcanologist who, her interactions with Captain Nemo and Robur of the Albatross aside, is a lady in a man’s field who is denied every privilege of tenure, field work, and serious consideration that any man in her field takes for granted, and is treated as anything from a nuisance to freak whenever she tries to assert herself.  This makes for a wonderful character, as she has to struggle against not only villains and forces of nature, but the very fabric of the society she lives in.  In many ways, this is the boldest of the lot, as MacArthur stands squarely up to the issue, and deals with it as it is. 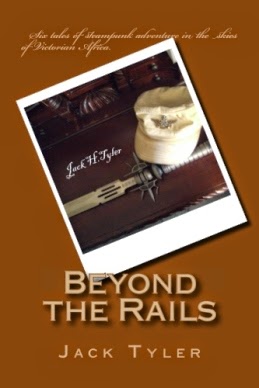 In my own Beyond the Rails, Patience Hobbs, the playful,
sometimes rowdy airship pilot of the Kenyan frontier, doesn’t deal with the problem (nor does her author); she leaves it behind.  Cousin of an exceedingly wealthy family, she is taken in when her father dies performing his job in one of the family’s enterprises.  Raised as an aristocrat, sent to finishing school, she leaves England when she realizes what will be expected of her as a “lady,” and flees to a place where one of either gender can be accepted on their own merits.  She went out to Kenya on a working holiday, discovered that she had a knack for piloting an airship, and has stayed.  She refers on occasion to the “gilded cage” of life in the London aristocracy, and expresses no interest in returning, even as one of the pampered ladies of the upper class. 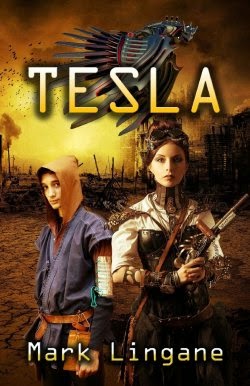 Mark Lingane solves the problem in Tesla by moving the calendar a thousand years into a post-apocalyptic future.  His heroine, Melanie, who is definitely the confidant or “sidekick,” is a dying teenage girl who is dragged by events around her into the quest of his hero.  Of course, as a work of future history, Mark doesn’t have to follow any particular rules, but he has written the agrarian portion of society as having established themselves along Victorian lines, and his young hero is astonished and taken somewhat aback by this very active girl who is so forward that she wears tight trousers in which “I can see the shape of your legs!”  Of course, not being a member of his society, she was never bound by it at all, but the friction between his mores and her free spirit produces a delightfully interesting dichotomy. 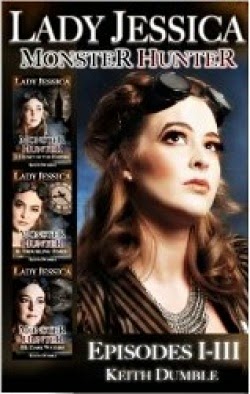 Finally, in Keith Dumble’s trilogy, Lady Jessica, Monster Hunter, the whole issue of women’s lack of equality is simply ignored.  Set in and around Victorian London, Lady Jessica McAlpin is the leader of The Black Diamonds, a scufflin’ crew of, as the title suggests, monster hunters.  Some of these monsters are the traditional ghouls and vampires, others are infernal machines, but no matter the opponent, Lady Jessie and her indomitable crew are right there to fight the forces of evil with whatever weapons are necessary, and no one bothers to suggest that this is no life for a lady.  Lest there be any mistake about this being set in Victorian London, Victoria herself is the target of one of the plots.  You might not think so to read this paragraph, but it works.

They all work.  Four very different solutions are presented here, and all of them create entertaining reads that reward the reader with a rollicking good time.  I know, one of those stories is mine, but I am basing that statement on its reviews and comments, which are uniformly favorable.  I guess the point is that, as has been stated elsewhere and repeatedly, the three most important elements of fiction are story, story, and story.  If you give your reader a breathtaking ride, he or she won’t complain because of the shape of the vehicle.

Many of you in this audience are writers, and the point of this article has been to make you think.  As steampunk or Victorian-era authors, how many female players are in your repertory company, and how do you use them?  Careful consideration of this question can bring your writing to a sharper focus than you may have thought possible; you may even be able to use the awareness of this theory to create another player or two.  As a reader, how many do you recognize in the stories of your favorite authors?  At the end of the day, I have to be grateful to Mr. Vidal for raising this point.  It has truly given me a new insight into my own work and that of others, and doesn’t that really count as one of those epiphanies we all love so much?

So take this bit of knowledge with you as you read or write, and use it to enhance your enjoyment of the activities we find so uplifting.  You may find, as I have, that they make our investment in our favorite fiction deeper and more fulfilling than ever!