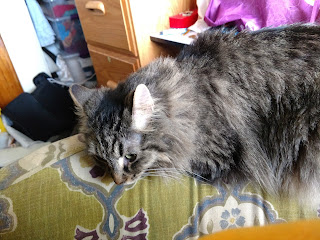 My precious, precious Loki, sometimes known as the MurderKitten, MurderFloof and Stitch, has passed away after an unexpected medical emergency.

The level of care he received was more than I could have asked for. They truly did everything they could, but in the end he was called to Valhalla.

I so appreciate the staff at the clinic, who were incredibly understanding and did everything they could to give us as much time with him as they could. A special thank you to Griffin, a French Bulldog who took it upon himself to sit on Sheena and I for pets and cuddles during this devastating process, and Marvin, a silver tabby who loves hugs.

I cannot adequately express the thanks I have for everyone who has sent messages of support, and I am still in shock over the financial support we have received to help cover his final expenses.

Loki was a five year old cat we rescued when he was about four months old. He was afraid to be touched, and while he never quite got over his issue with human hands, he was making strides. He was learning how to be a cat. He stayed with me when I was in pain. He walked me through the house during flare ups. He purred and laid on my chest during my surgery recovery.

If you would like to help with his final vet bill, Sheena is accepting donations through Ko-Fi.

ko-fi.com/sophiabeaumont
Posted by Ash K. Alexander at 7:07 AM No comments: