Once More Into the Fray

Last year, I made the plunge for the first time into #PitchWars and all it's glory. While I didn't make it in, the experience was a good one. So I'm back! I have a solid query letter, a CP'd MS and a sort of okay synopsis to start with. My battle plan is set.

While I was a MG hopeful last year, this year I'm YA. The book I'm hoping will bring me Victory is SCOUT'S HONOR. SCOUT'S follows Dinah, a Girl Scout in a future where the United States has fallen to a dictator and the Scouts have become a worldwide military force for resistance. She's prepared to do whatever ever it takes to rescue her mother and maybe she'll overthrow a government along the way. 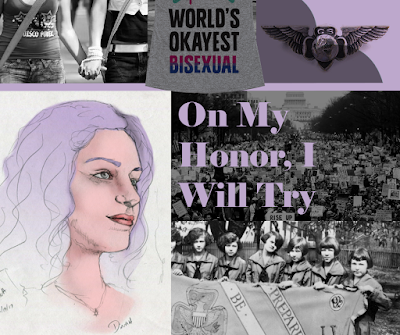 With new friends and a budding romance with fellow Scout Eddy (Edwina) Stonetree, Dinah has most of the tools she'll need to get the job done.

These kids follow the Scout's code of honor and sisterhood, willing to sacrifice themselves for the betterment of the world.

Dinah is the one driving her own destiny. She chose the path in front of her, and she isn't about to let anyone get in her way.

A Note:
I wrote much of this book after the election while watching all of the West Wing and Phineas and Ferb. So...if you like those things, you'll probably gel with the book.

(GIF because I love Danny. I love him.)

Who shall fall into the shadows of Dinah's Schemes with me?

I'm looking for someone who can help me catch plot holes, see things I've overlooked. I usually need some help fleshing things out a bit. I like my stories lean and I can be a bit sparser than necessary. I can take critique and I like doing the work. I mean, sure, line edits aren't the most fun thing ever, but the results always make me happy. I know I can miss emotional beats and perhaps some of my gooey romancey scenes may need more gooey.

(The Firestorm girls from 2D were of great inspiration to me)

As a writer I'm more a pantser than a plotter though I'm an occasional hybrid of two. I have a cat named Loki (he bites). When not writing I read, play video games (Right now it's Fallout 4), make art and bake things.

I was recently appointed with my dear friend Sophia to run the Literary Track at Steampunk Symposium starting next year. We're very excited.

I grew up on Queen, Evanescence and Garth Brooks. These days, I'm still a Queen fan, but country music and I have parted ways--though my recent obsession with the Decemberists tells me that folk music and I aren't done.

I love historical TV shows so yes I rewatch Miss Fisher's Murder Mysteries, Murdoch Mysteries, Penny Dreadful... There's a theme there. If it's fantasy, I've probably watched it, no matter how bad and I have a secret terrible addiction for Disney channel movies. I have watched the West Wing about four times and while writing this book attempted to find as many Girl Scout related films and shows as possible and discovered...there are not many.

Check out the rest of the blog hop here!
Posted by Ash K. Alexander at 1:04 PM 1 comment:

So, I was one of those people that won a 1st page critique and mine is actually up now. It's sort of an odd process. You don't know it's going up/gone up so you just sort of check every day to see if it's yours. Well, day 15 came and there mine was!

I actually wasn't familiar with Summer, so I didn't really know what to expect out of the critique. I thought it was fair, though I didn't entirely agree with some points (and folks, you'll always find some things you don't necessarily agree with in a critique), a few things did stick with me.

I made some changes and my first 500 words now look like this:


Without the tiny silver star around my neck, I felt naked. It had been a comfortable weight. Reassurance that no matter how far apart we were, there was some small part of my mother still with me.

The only thing that mattered now was Mom. Papa might forgive me for that. He certainly wasn’t going to be happy about me smuggling myself into the US just to get myself arrested. If there’d been a better way to get myself into the US penitentiary database, I would have taken it. But there wasn’t. All the computer engineering badges in the Girl Scout repertoire weren’t enough to crack a closed system from the outside. I know, I’d tried.

So here I was, in a dingy bunker underneath the old Library of Congress. Washington D.C. was a warren of tunnels, dotted with bunkers like this one. It was a lot like my urban survival patch exam, except there were more people with me. The chatter of nervous excitement wasn’t as comforting as I’d have liked.

I sat down in front of the cracked mirror and started braiding my hair as tight to my scalp as possible. I lifted the wig from its stand, tugging into place, adjusting the scalp line and pressing the edge against my skin until it blended in precisely. I couldn’t quite help wrinkling my nose at the blonde—it just wasn’t my color, but the less than natural shade of lavender my hair was typically would be a dead giveaway I had bio-enhancements.

I picked up my makeup brush, tinting my eyebrows and eyelashes. By the time I was done, I looked like any other “ideal” All-American Girl. I opened the contact case and slipped the micro camera lenses into my eyes. The heads up display activated moments later, my regular start up windows floating in front my eyes thought invisible to the rest of the world. A start wheel noted the camera sync to my internal computer. It would stream back to HQ and send to a few hundred journalists before they could stop us.

I swallowed a wave of nausea. You’re doing the right thing.

I took a deep breath and pulled up my mom’s photo, focusing on her face. “I’m coming, Mom. I’m coming.”

My stomach was in knots. I clenched my teeth together and pushed back the swell of nausea. Everyone here knew what they were getting into. I hadn’t been smuggled into the country just to back out now. It was too late for that when I stepped out of the bunker to join the march.

The early morning chill clouded my breath in front of my face.

“You okay, Rebecca?” Christian asked. A fellow Scout, he’d been part of the half-dozen or so of us smuggled in on assignment. Of course, his was an official assignment, whereas mine was…not. When everything went to hell in the US, it was teenagers that fought the longest. As it turns out, kids who’ve been taught about compassion, loyalty and wilderness skills make for fierce resistance against tyranny.


So it's not SUPER different. But the pacing has been changed and made some clarifications. Honestly, some of the things she noted were things I'd added in due to comments from a prior beta reader and hadn't been 100% comfortable with. But, I'm rather happy with how this is now. It may go through some further tweaks, but I thought it might be helpful for you to see both the critique and how the advice was applied.