My dear friend did a post with this title the other day, so I thought I would jump on and answer her. The question, what five books had the greatest impact on you as a person, reader and writer? Well, I did get nine books permanently tattooed onto my flesh, so I have a fair idea where to start. It's just a matter of narrowing it down a smidge. 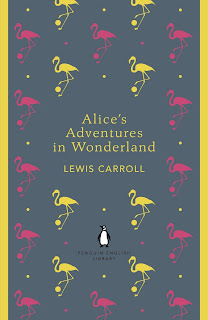 This will surprise few people, but I have a minor obsession with Alice's Adventures in Wonderland. It was a story that resonated with at an early age. A little girl going on an adventure. By herself.

As a young girl with a brother and parents who could be frustrating to the point of insanity, I fell in love. I wanted to fall down a rabbit hole and find a magical land where animals talked and mushrooms could make you grow. I don't consciously recall when I first read or heard the book. I feel like it's just always been there at the back of my mind.

These days I collect copies and consume just about any related media meta or otherwise I can related. The story of a little girl's adventure into nonsense has certainly effected my work. 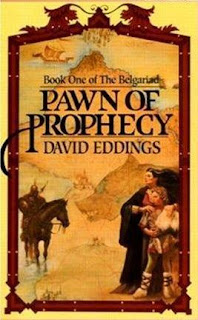 The Pawn of Prophecy... It seems quite a jump, I know, from Children's fiction to adult fantasy but here's the thing--I did. After picture books and some young reader things I dove headfirst into Adult Fantasy novels. In the Pawn of Prophecy I found that age old story of a child becoming an adult while at the same time struggling with fantastical forces and a fate he couldn't outrun.
Garion became a man in those books, a hero. I wanted to be a hero.
I wanted to have people who respected me and looked up to me.
I wanted a cool aunt who could cast magic spells too, to be honest.
I spent a lot of time with Garion. (Sparkhawk too for that matter).
I liked that I could predict what would happen next. I liked that I knew the good guys would win. It was a bit of a turbulent time in my life and the safe assurances of Garion's world made me feel better when my own world seemed to be falling apart. These books left an indelible mark in my preference for high fantasy, and a definite stamp on the way I write fiction. I read it almost once a year. 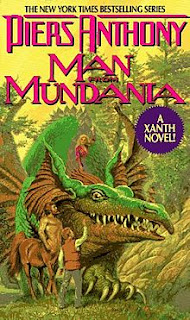 Ah, good on Piers Anthony. At first blush, it was because Xanth was shaped like Florida, and I was born there. His series got me through Middle School traumas, broken friendships and the inevitable bullying that seemed to follow me throughout it all. Here was a strange, bizarre place (Much like wonderland) full of puns and dragons and... I wanted to go there. (Escapism is clearly a driving force in literature for me.)

But it was Man from Mundania that definitely left the greatest stamp. A seemingly ordinary man turns out to be something extraordinary. He uses common sense and general know how against this world he doesn't understand and I related so much to that. I can be impractical but I've always believed that common sense was the most important thing a person could learn to have and Grey had it.

He also had a snazzy magical power. I've re-read this too many times. 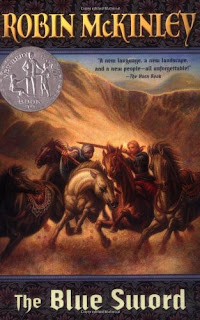 Now we get into MG fiction. I was an odd sort of child. I started getting into MG books in high school, which I refer to as my MG Renaissance, spurred on by a stint as a library aide and a great deal of free time my Freshman and Sophomore years.

The Blue Sword was the book that reminded me of my love of girl heroes and knights all in one fell swoop. It was a masterful thing that led me to read many other books. Harry was this fantastic, brave girl thrown into circumstances she didn't understand and still she kept her head high and didn't falter.

I love her immensely. It was this book that brought me back to writing to honest. Made me remember what I wanted to write. I definitely have Robin McKinley to thank for inspiring me. I don't know if I ever would have written much of things I have, if not for this book. Which I read over and over again to this day. 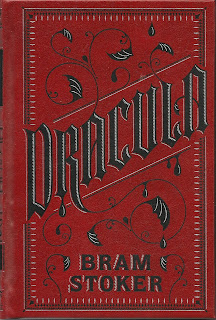 Now for the wildcard. I read Dracula on a self-assigned book report project my senior year of high school. I am a fast reader. I can read a novel in a few hours. I was known for reading three or four books a day on weekends.

It took me a month to finish Dracula. Granted, the first weeks were spent laboring at the initial chapters, getting bored, and setting it aside but still. Not my usual. It took me a lot of time to get into this book. Took me time to acclimatize to the weather, as it were. But when I did--I found in myself a love for the romantic I had no idea was there. Classic literature was never really my thing but Dracula... It changed me. It changed the way I wrote. It changed the way I thought about character construction and story telling.


It was this amazing story and I couldn't believe it took me so long to fall into it and fall in love with the hero of the book: Mina. I actually can't watch any of the films because I haven't seen a single one that does Mina justice the way the book does.