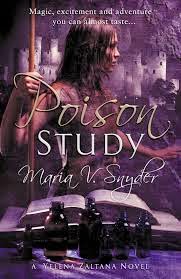 Yelena doesn't count as a lady with a sword, but that's okay because she has a bow staff. Yelena is an amazing character. She's so convinced that her life is plotted out in front of her, and so broken in the beginning that you just want things to work out for her.

In fact, her arc is very similar to many male characters I've seen before. Except Yelena is of course female.

Now, one could argue that these books follow the trope of tortured women make heroes, but we get tortured male heroes all the time so I'd call bull shit. Yelena doesn't let her past define who she is, who she wants to be.

Yelena is part of a very rigid society. Everyone wears a uniform. Everyone has a job. If you kill someone--well, you die. Except Yelena doesn't. That's not really a spoiler as it's in the first five pages.

I just re-read the three novels (though I know Assassin Study is coming out?is out?) so I'll get to that one eventually as well. My favorite thing about Yelena is that once she sees an opportunity, she takes it. She fights back. She sets the rules and the boundaries in her world in any way she can.

And she is so bad-ass.

I feel like I never hear people talking about these books, or Yelena, but trust me--you need to read them.