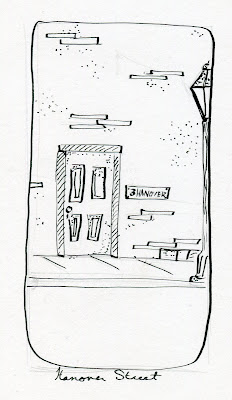 Ask a question, open a door. Now, find the next lock and start walking down the winding road. It’s a long journey, and a dangerous thing I ask. Keep your imagination close, and your chalk closer.
D. H. C.

It was chalk. Chalk on David’s fingertips when he came home from work at night. From the lab. This lab. The lab I never went to see because I trusted my husband. I still trusted him but…I didn’t understand. My coat hugged my shoulders to comfort me. I sighed. I’d opened a door, two doors. What question did I need to ask?
It wasn’t, how did David die. It wasn’t even why did David die.
“Is David dead?” I said it out loud. I didn’t expect anyone to answer.
The whole room, every stick of furniture and every knick knack shouted at me. A single syllable. A single word.
It wasn’t yes.
I felt my knees shake. “Why did he leave?”
The room didn’t know. But I felt danger. I felt fear. And everything was too much. Too many tiny shouts of their fright. I fell to my knees.
“Shut up!”
The room fell silent, only hedging apologetic. I took a shaking breath.
David wasn’t dead. But he was gone. He’d left me. David wouldn’t have left me without good reason. Had it been David that put the key under the tree? Had he really been there last night in bed with me?
I rubbed my ring. There was spot on the far wall that attracted my attention. It was bare, darker than the rest of the visible wall space. I stood, wandering toward it. I touched it, it was cool. Cooler than the walls around it.
I am not a wall. It seemed to say.
“What are you?”
A door.
I pulled the table away from the wall; it dragged against the floor in protest. I managed to get it far enough away to squeeze close to the wall. There, were the table hid it, was a keyhole flush with the wall, no decoration at all. I pulled the key from my pocket and slipped it into the lock. Like the others, it fit and allowed me turn it.
A crack appeared around the lock to create a door the size of the strange spot. There was a distinct click, and the door swung open inward. It was dark, inky and thick. The light from the lab did not penetrate that murk. I took a deep breath. There was nothing else to do. This was my path. I stepped through the door.