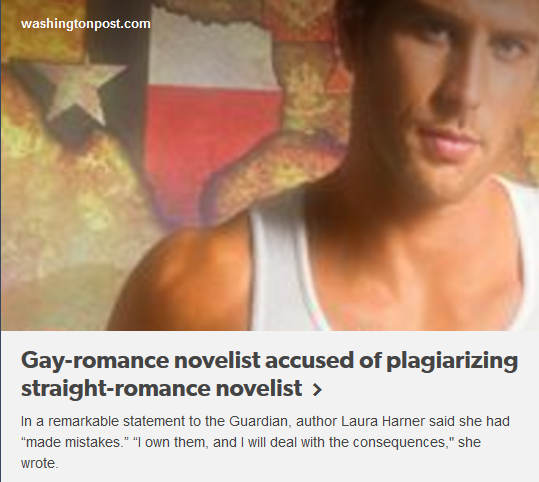 This article (and the comments to said article) are so infuriating. The “fill-in-the-blank” remark by the author is condescending and smacks of the typical patriarchal attitude towards books written for/by women. We should be focusing on the fact that this author plagiarized books, not the genre those books fall under.

Moreover, equating romance novels, and especially M/M romance novels (as is so often the case) to pornography is infuriating. The tone deaf commentary of some commenters “I don’t understand why a woman reads M/M romance” and similar remarks really makes it clear that since this is an issue of plagiarism regarding what women read, it’s not as important.
One person even remarked that if the plagiarist had ripped off a well known male author, then of course we would have discovered it quickly, but in the dearth of romance novels, how were we supposed to?

Funnily enough the Guardian ran a rather similar article (sans the patronizing tone) yesterday. Does that mean all news articles are just “fill in the blanks”?
Posted by Ash K. Alexander at 11:51 AM