So I saw one of those plush faux taxidermy unicorns at Target (heretoafter referred to as "plushidermy"), and I wanted one. Except in purple. 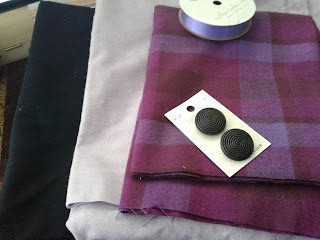 So I bought fabric (this is lightweight flannel) buttons, ribbon and thread and got to work!
First off, you can buy patterns already made up for plushidermy creatures of all sorts. I wasn't in love with any of them, and since I have a background in sculpture and toy design I was confident enough to draft my own pattern and move from there. I...sort of forgot to take photos of that process, but I plan to make another out of light canvas and I'll do that then. That said, if you can think three dimensionally and draft your own plushy pattern, have at! 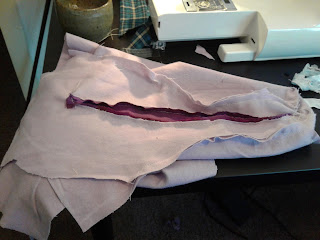 I first sewed the head seams together up to the point of the ears, as I would need to fold those into the seam. You can see that stage on the left. It doesn't look like much, but you can see the seams are curved and I did the plaid blaze as an inset.

This wasn't too bad to sew together. My unicorn is pretty big, so the finer seam details were easier to navigate on the machine than something smaller would've been. 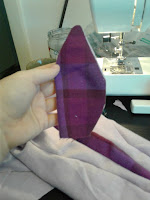 I made the ears with the plaid on the interior and sewed them into the head seams. However...the flopped. Which had my unicorn looking a bit too much like a donkey for my taste. Luckily, I had some aluminum modelling wire hanging around.

It's pretty thick, bends easily, cuts easily and is perfect for this application. I cut a length a little longer than the ears and threaded it through the seam. (See left) Then, I curled the ends in to round them off and was able to stand my ears up and mold them to shape after stuffing.

It was SOOO much easier. You could get a similar effect by adding some interfacing or thick felt into the ears. You're just looking to stiffen them up a bit. 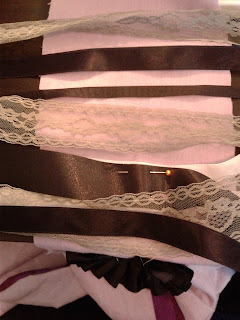 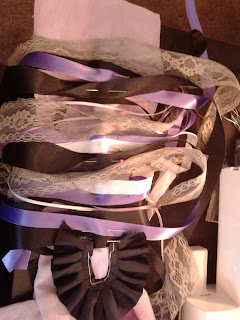 The mane was next. I had a bunch of lace ribbon, ribbon and other trim odds and ends to use. I cut the lengths and laid them out along the spine, pinning as I went. There was no precise pattern here, I was just trying to get it to look aesthetically pleasing. I used purples, blacks, grey and white with different textures. I also added some larger ribbon to the mane later (hand stitched) to add more dimension to the unicorn's mane.

It was a pretty simple straight stitch down the spine, you can also see I added some ruffle trim to the base area where the horn was going, just for some more texture and fun. This is something you can do on ANY plushidermy pattern. Really, adding trim, patches and texture will help make it your own creation. 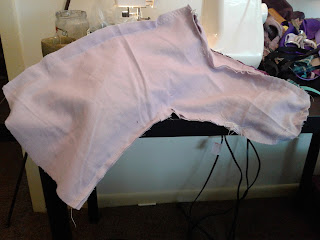 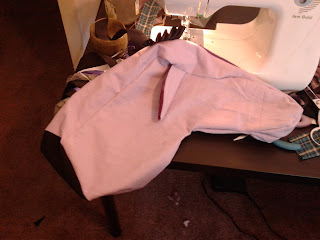 Here's my little friend all stitched up! Inside out first, and then outside in. The eyes aren't in yet, but you can see the structure of the seams I used to give the head shape. One thing I did learn in this process was that the flannel has more stretch than I liked for a more architectural head (hence why I plan to make another with light canvas, less stretch) You do want to think about your materials. But I love how soft she is and while she has flaws, I'm super happy with her as a first try. 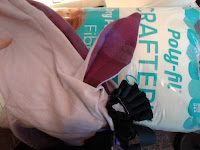 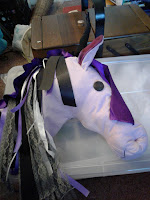 Time for stuffing! I used the harder poly-fil (again, I wish I'd gone with squisher here to compliment the stretch of the fabric but...live and learn.) I got her mostly stuffed and added the eyes, the thick purple ribbon and embroidered on a mouth and added depth with nostrils. That was done with a doll needle and strong thread. It's literally just a large pair of stitches drawn the plush in. The horn is on there as well.

I followed this tutorial by BeeZeeArt for the horn. It's super simple. 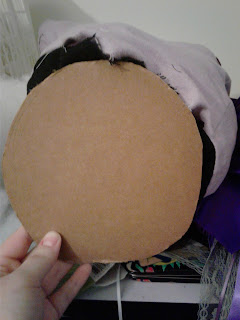 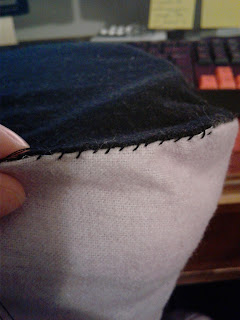 Next up, I added some support to the neck with a ring of cardboard. Foam board would be better, but cardboard works here. I the closed up the hole. 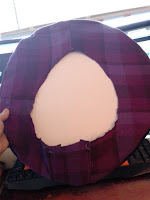 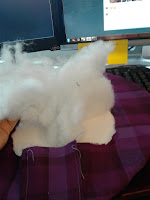 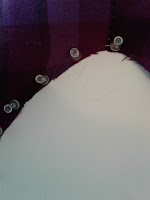 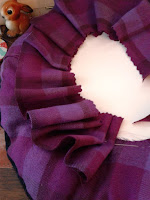 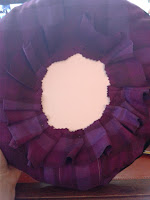 The next question was, how do I hang her? She was too heavy to hang on her own, so I whipped up a base. I shaped it like a floral ring, using foamboard and covered it with plaid and black flannel. I then stuffed it. I used the clear thumbtacks to pre-poke holes into the foam board and the stitched it all down by hand. After that, I added a pretty ruffle to camouflage the edges I didn't like and then it was time to put the head onto the board!

I used ribbon to do that. Which, pre-planning would have helped me here too. I ended up cutting slits in the cardboard and the foamcore, and then used a thick ribbon to stitch unicorn head to base. I put a ribbon loop in the seam of the plaid cover and then hung the whole thing on the wall. 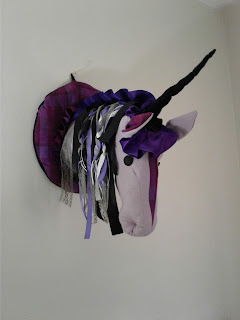 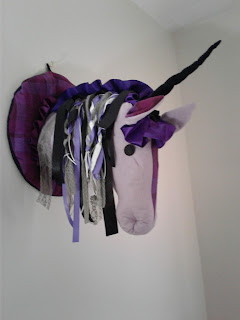 Cheers! And if you have any questions, feel free to post a comment below. I hope to make a more step by step tutorial on my next unicorn.