The Alchemist's Widow: A Winding Road & For the Love of Family 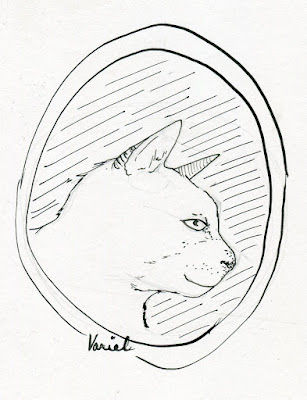 For the Love of Family


“Miss? Miss?”
“My name is not Miss.” I shoved away the hand shaking me. “I’m a married woman you know.” All right, technically, in the eyes of the law, I was a widow. At the moment, I didn’t really care. At the moment, I wasn’t really sure where I was. “Where am I?”
I blinked open my eyes. The walls were beige. The walls were beige and they spoke of important things and important people. Of weighty topics. Life and death.
Shit.
“You’re in a hospital, Miss.”
The person that called me Miss was a young man. Younger than myself I thought and more awkward than I’d ever been. He wore a uniform. I believe I’d once been informed they were called scrubs. His were green and at his pocket a nametag bit down with tiny metal teeth. The tag liked the pocket very much.
“Why am I in a hospital?”
“Mr. Crowley brought you here Miss. He said you weren’t feeling well.” There was an undertone to his words.
They think you’re crazy. The bed whispered to me.
Fantastic. Fantastic with sugar and marshmallows on top. I refrained from rolling my eyes. “If you wouldn’t mind terribly, I’m leaving now.”
I sat up; pushing way the white sheets and thin blanket I’d been covered with. And realized my clothes had been replaced by an embarrassingly thin hospital gown. There were ducks printed on it. “Where are my clothes?” This was only of secondary importance, because the key was gone. “Where are the things I came in with?”
“Miss, the doctor hasn’t finished examining you, you can’t leave just yet.”
“Give me my things, right now.” I stood up, fully aware that I was in no shape to take the man down. For one thing, I was wearing a duck gown.
“Catherine.” The voice came from behind me. Clutching the back of the gown tighter, I turned round. My mother. “Dear, get back in bed.”
“There’s nothing wrong with me.”
“I didn’t say there was.”
“I don’t need to be here.”
“David’s father called us, Catherine.” Us being the rest of the family I was sure was waiting outside the room. “We were so worried; you’d been gone for three days. Then you show up at the manor ranting about David still being alive…it doesn’t look good.”
Three days? Great.
“I’m not crazy, Mother. David is alive.” I swallowed my fear. It tasted foul, bitter. “He sent me the key! Hanover Street, remember? It was his lab. I found…he’s not dead.” I could hardly tell her I’d stepped through a door that went to a place that didn’t really exist and then left through a door I made appear with a stick of chalk.
“Catherine…” My mother shook her head. “You need help.”
“I am not, crazy.”
“Don’t make this harder than it has to be.”
“Harder? Harder? I lost my husband, I lost him and then I find out he’s not dead. He’s gone. He’s running away from something and I can’t help him if I’m in here! Why does everyone want me to move on? Why should I? He is my match.”
“Catherine—”
“No.” I shook my head. “You…you never asked after he died.”
“Asked what?”
“You never asked what our news was. Remember? Our big Christmas surprise? You never asked. Not once.”
“Catherine—”
“I lost more than my husband that day.”
“Catherine—”
“You never asked because you hoped it wasn’t true. You were praying that I would lose myself in grief over David, praying I wouldn’t remember.” Every object in the room winced at the waves of pain I couldn’t stop. Murmured words of comfort. “But I did. I do. I couldn’t forget. And all the while I mourned my husband, I mourned our child too.”
“I didn’t know, Catherine, I didn’t know.” She shook her head. But the room here had seen its fair share of lies, and outed her.
“You’re a terrible liar.” I closed my eyes. “I lost my baby the day after I lost my husband and you said nothing. Said nothing when they rushed me to the hospital with blood pouring out of me. With my baby pouring out of me.” I could feel the man’s discomfort at the topic. “You knew what it meant. How could you not? My baby is dead, but my husband…I can get him back and I will not let you stop me.”
She shook her head. “I can’t let you keep hurting yourself.”
There was a pinprick of hurt in my arm. I glanced back to see the man that called me Miss pull the needle from the arm. “Bas—”
Parts Seven&Eight>>
Posted by Ash K. Alexander at 9:00 AM